Booze in my flagon:  Pinot noir

Having conquered Meereen, Dany is sitting out on the terrace garden of the great pyramid eating breakfast and looking over the city.  The battle happened off page, but Dany’s people led a slave rebellion.  She had nailed 163 slave masters to crosses, just the same as they had done to the little slave children.  The rest of the masters were spared.  She had felt righteous at first but later feels guilty.

She tells herself she did it all for the children and gets ready to go hold court.

All of her inner circle are in the throne room.  She wonders who will betray her next and thinks the other two heads of the dragon, whoever they are will be the only ones she can trust.  I see the paranoia of her father is setting in.

She complains about all the flies in the city.  Daario points out that corpses breed maggots and maggots breed flies so she orders Grey Worm to see that the corpses from the sack are removed.  You’d think for the smell alone she’d have wanted the corpses gone, but I guess not.

First visitor is a man named Ghael.  Sounds like the next trendy name for boys in the suburbs but he’s an envoy from Astapor representing the new king Cleon.  She had left a council to rule their but Ghael claims they were caught scheming to bring back slavery and Cleon executed them for it and was named king.  Missandei tells Dany he had been formerly a slave who was a butcher.  A butcher king doesn’t seem to bode well.

Ghael claims that Yunkai is plotting against her and wants to make an alliance between Astapor and Meereen.  He wants to seal this an alliance with a marriage between Cleon and Dany.  She says she’ll consider it but I think we all know that’s going to be a big NO.

The next visitor is a Qartheen ship master.  He tells a different story.  He says Astapor is a famine stricken cesspit and Cleon AKA King Cleaver is seizing young boys and attempting to make new Unsullied.  The Qartheen wants slaves.  Daario says several of the freed slaves want to sell themselves to go live in Qarth.  She says they can sell themselves but not their children or wives and Dany will get a tenth of the price from the Qartheen.

After these meetings, she has Belwas fetch Barristan and Jorah for her.  This will be the first time she’s seen them since their past dishonesty had been revealed to her.  She questions Barristan about why he bent the knee to Robert after the rebellion.    He said it’s because Viserys was a horrible little brat who was about to turn just like Aerys and wasn’t fit to rule.  Dany had been under the impression that the nickname Mad King was a lie, but Barristan tells her the truth.  He said he waited to reveal himself because he wanted to make sure she was sane.  He promises to serve her faithfully for the rest of his life and she decides to formerly swear him into service as he’s very knowledgeable about the history of Westeros and how King’s Landing works.

Jorah on the other hand, just whines a bunch and tips his fedora at her.  He admits that he had even sent a report when they were in Qarth.  Barristan rats him out about how he told Varys when she became pregnant.  He pleads for her forgiveness and says he loves her but she cannot forgive him and he is exiled.

The next day after a restless night, Dany informs her people (minus Jorah) that she planned to stay and rule Meereen rather than march.  Because how can she rule the seven kingdoms of Westeros if she can’t manage one city?  I’m sure the people of Meereen would be flattered to know they were being used for Queen practice.

Tommen is signing a bunch of papers that Kevan is giving him during a small council meeting.  Jaime is bored and sore from trying and failing to fight with his left hand.  He’s been practicing with Addam Marbrand.  Jaime sucks at fighting left handed so he’s pretty depressed.

Most of the papers are giving land to Lannister allies and taking it away from enemies and a bunch of pardons.  Including one for the Westerlings.  Hmm…  One legitimizes Ramsay Bolton formerly Snow and makes Roose Warden of the North.

Finally he can’t take it anymore and asks for leave to go.  Outside he runs into Steelshanks.  He’s about to leave for Winterfell with “Arya Stark.”  She’s a young girl, hollow eyed and frightened.  A little too old and tall to be Arya.  So who is this mystery girl?  Jaime doesn’t know or care.

He passes the area where Gregor and Oberyn had dueled.  Gregor has indeed been poisoned by Oberyn’s spear it seems.  He’s still alive but not healing at all and he spends all night and day howling.  His veins are turning back and when Pycelle tries to leech him, the leeches die.  Do I need to post a Grumpy Cat meme here?  It seems trite in the year 2017.

Oh, what the hell 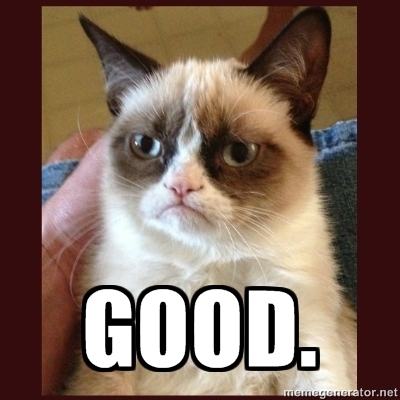 Whether it’s cliché or classic, it works.

Jaime returns to his bedchamber and finds Cersei waiting for him.  He thinks some lusty and twincestuous thoughts but Cersei is just there to complain.  She’s been kicked off the small council by Tywin and about to be sent back to Casterly Rock and she wants Jaime to convince him to let her back on so she can continue to be the second biggest helicopter parent in Westeros after Lysa.  Predictably, she’s also not thrilled about Tommen’s betrothal to Margaery.

Somehow the subject of the attempted murder of Bran comes up.  Cersei denies involvement in it and doesn’t think Joffrey was either.  FWIW, I don’t think it was Joffrey either!

She wants Jaime to offer to leave the Kingsguard in exchange for Tywin agreeing to let Cersei stay and not marry her off.  He says no but suggests she tells Tywin that they’re going to have a Targaryen style incest marriage.  She doesn’t want to do that so she tries to sex him into going along with her.  Shockingly, he turns her down as it’s not safe to do it there.  Cersei responds by asking if his manhood was hacked off in Harrenhal and says she doesn’t know why he would have the courage to protect Tommen when he didn’t avenge Joffrey.  Yeah, she’s still mad he won’t kill Tyrion for her.  Jaime still doubts Tyrion’s guilt.  He kicks her out and she insults his penis again and leaves.

Jaime sends for Loras and Brienne to ask if he’s spoken to Brienne yet.  He seems a little less certain that she’s responsible for Renly’s death.  He sends Loras way to speak with Brienne alone.  They sort of awkwardly flirt for a minute.  He tells her about faux Arya so that she wouldn’t hear that Arya was in the north and try to rescue her.

Jaime then gives her the sword made from Ice reforged.  He tells her to call it Oathkeeper and that she is too find Sansa and bring her somewhere safe.  She wonders why he’s sending her on this mission.  He thinks that Joffrey was a squirt of seed in Cersei’s cunt who deserved to die but he tells her that Sansa is his last chance at honor.  Brienne sweeps out awkwardly.

Deaths in this recap: 0

Maybe deaths in this recap: 0

Betrayals in this recap: 0

Incest incidents: 1.  Cersei and Jaime fool around a little