Arya and the BWB are in a town called Stoney Sept.  It’s the site of a Robert’s Rebellion battle that Ned had won.  Although the name reminds me of Stoneybrook, the town in which the Babysitter’s Club takes place.

And for the rest of this recap, the Brotherhood Without Banners will be referred to by me as the BSC.  Because, why not?  I think you could call them the babysitters of the Riverlands.  Beric is totally the Kristy.

Harwin, who is probably the Mallory in this BSC/BWB crossover due to his affinity with horses explains the battle.  It’s perhaps the first mention of Jon Connington, hand of the king to Aerys.  He’ll factor in to the story later and is probably why the battle is mentioned.  Some septons rang bells warning smallfolk to lock themselves indoors, so it’s called Battle of the Bells.  The BSC and Arya hear the gossip in town.  That Hoster is dead and the Kingslayer is still loose.  The town is a burnt out mess where all the townsfolk hide.  Just more demonstration of how war hurts the common folk most.  Pretty depressing.  Not as depressing as the town square though.  It features some tiny little cages with Northerners stuffed in them.  They were looking in a different town for Jaime, didn’t find him, and decided they might as well stick around to do some raping and murdering.  The descriptions of the dead and dying men are vivid and involve maggoty crotches.  Yikes.  Anguy mercy kills the men who are still living.  Since he’s from a warm deserty place, he’s the Dawn.

The BSC take their charges Arya and Gendry to an inn.  The serving wenches hit on Gendry, but Gendry is not ready for that yet and just blushes.  They also forcibly bathe Arya and make her dress all girly again.  Haha!  Arya starts to notice the weird number of girls working there and finally figures out that this is actually a brothel.  One of them, Bella claims to be Robert’s bastard and she probably is because she has the same hair.  Bella really his on Gendry hard but he rejects her and another incest incident is narrowly averted.

That night Arya has a wolf warging dream.  Perhaps Nymeria is close.  She wakes up to hear the barking of several regular dogs.  A Lannister man has been delivered to the cages.  Arya hopes it is the Kingslayer and the chapter leaves us on that cliffhanger.

When the Wildlings and Jon emerge from the cave, Ghost is gone.  Jon wonders if he really did understand the order to go back to Castle Black.  It is time for Jon and Ygritte, led by Jarl to climb the Wall with the other Wildlings.  Jarl chose a spot to climb that backs up against a stone ridge so that there will be more hill and less ice shear to climb.  The Thenns in the group get apprehensive.  They live so far north, they’ve never seen the Wall before.

Jon is getting apprehensive as well and unshockingly, ever more angsty.  He’s worried that if he ditches Ygritte, she’ll get killed by the other Wildlings for associating with him.  But he knows he can’t bring her back to Castle Black either.  Or anywhere else in Westeros.

Unlike the Thenns, Jarl and his men are unfazed by the Wall.    Although they are young, they are apparently experienced raiders.  Jarl divides his posse into teams and promises the first team to reach the top would get rewarded by Mance with fancy new swords.  Jarl sounds like he’d be an excellent corporate middle manager.  Jon regards them grumpily.  He’d be a good Office Space protagonist.

Jarl’s climbers are making slow but steady progress.  Styr Magnar is getting impatient, fearing that Crows would find them.  Styr doesn’t seem to grasp the danger.  Jarl is ahead for most of the climb, until his group hits a bad patch of ice and has a little fall.  But they do recover.

Four hours later, a loud crack is heard.  An avalanche of Wall falls down and when the dust, or ice as it were, settles, Jarl and his team are just gone.  Jarl was impaled on a tree in the fall.  Two of the other men were dead and broken with the fourth man still alive despite a shattered spine.  A Thenn gives him mercy by smashing his head in with a rock.  This metaphor for corporate America is looking more and more apt…

By the time the dead were burned in a pyre, the other two teams made it up to the top and lowered hemp ropes down for the rest of the party.  The raiders still down below attached rope ladders to the ropes.  Two Thenns fell from the ladders on the way up, but everyone else makes it to the top of the wall safely.  Ygritte is super freaked out and crying.  Jon tries to comfort her and tell her not to be scared but that just makes her hit him.  She’s actually crying because they didn’t find the Horn of Joramun to bring “this cold thing down.”

Jaime is in severe phantom pain from having his hand chopped off.  His tears make the Mummers laugh at him and now he feels like he knows how Tyrion feels when he’s always being mocked.  I rather doubt that.  It just reminds me of white/male tears memes.  This one seems appropriate 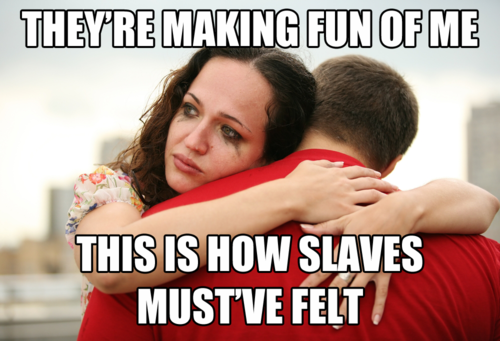 At one point, they tie Jaime and Brienne face to face on a horse and then make fun of them for being lovers.  What is this, third grade?  Does Brienne have girl cooties now?  They tied Jaime’s hand on a cord around his neck and it slaps Brienne’s boobs while they ride.  I don’t even know what to say about that.

They further torture Jaime by giving him horse piss to drink.  He finally snaps and tries to fight them but is too weak and it just results in further humiliation.  He finally gives up and wants to die until Brienne calls him craven.  This strengthens his resolve to live for Cersei, Tyrion, and the killing of his enemies.

Finally one night, some of the Mummers come to rape Brienne.  She plans to fight them but Jaime advises her to let them do it and “go away inside.”  This triggers a memory of him having to numb himself to deal with the side of the Mad King Aerys Rickard Stark in his armor while Brandon Stark choked himself trying to save him.

Of course the Mummers are telling her that she’s too ugly to rape, but they’ll rape her anyway.  Apparently the Bloody Mummers are the Westeros equivalent to 4chan trolls and/or gamergaters making threats on twitter.  Actually, it’s about ethics in mercenary violence.  Jaime, in a last ditch effort to save her, shouts something about SAPPHIRES! because Tarth, where Brienne is from is called the Sapphire Isle.  Jaime gets kicked in the stump by Rorge but Vargo Hoat is convinced to keep his men from raping Brienne.  Hoat as a speech impediment, so it’s entertaining to Jaime to hear him say “THAPPHIRETH!”

Hoat the Goat wants Jaime paraded into Harrenhal so he and Brienne are dragged in on foot.  Jaime is more resolved than ever to live and take vengeance.  Brienne doesn’t seem too worried because Roose Bolton is running the place and he’s a Stark bannermen but Jaime remembers about how the Boltons have their enemies flayed.  He’s less optimistic.

Hoat proclaims about how he’s brought the “Kingthlayer” and there’s a distressing number of Freys in attendance.  Everyone starts arguing over what to do with Jaime until Roose makes his quiet and creepy presence known.  He even scares Jaime, who finds him a thousand times more threatening than Vargo Hoat. Bolton gives the news of the Lannister victory of Blackwater and tells them that it is now Margaery who will be marrying Joffrey.  Brienne tells Roose Bolton about how the Mummers tried to rape her and Roose expresses displeasure about both that and the loss of Jaime’s hand.

Roose sets them up with rooms and has the former maester Qyburn attend to Jaime’s stump.  He wants to amputate Jaime’s whole arm because it’s all gangreneous and nasty, but Jaime will not hear of it.  Instead Qyburn cuts away the corrupted flesh only, which is also very painful.  Qyburn tells Jaime a little more of the Battle of Blackwater and then they discuss Roose’s extremely disturbing affinity for leeches.  Then the chapter just kind of ends.

Deaths in this recap: 1.  There are many, but Jarl is the only named character who dies.

Betrayals in this recap: 0

Incest incidents: 0.  Almost with Gendry and Bella, but not quite!